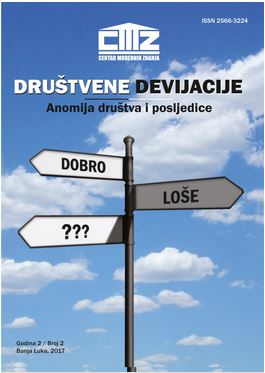 Summary/Abstract: The anomie of society in Bosnia and Herzegovina and the crisis of value system have caused numerous deviant phenomena that are increasingly identified among young people. The growing aggressiveness of children and peer violence at school and at home is evidence that dysfunctionality of society is increasingly reflected in the behavior of children and young people, their attitudes, the system of values, atitude to work, education, but also to the ever increasing crime rate, where perpetrators of the criminal offense are juveniles in numerous cases. Speaking of peer violence we often forget to analyze what happened to those children before the violence was committed, as well as what happened after a few years of the sanction imposed in their life. In most cases, the data of social anamnesis show socially inappropriate behavior even before violence has been committed. Often because of inadequate programs and methods of work, as well as dysfunctional sanctions, such children continue on wrong way and become juvenile delinquents, who often end up in a number of educational facilities or later in jail because of numerous criminal offenses. The society and its institutions must take responsibility and do everything to reduce or, to some extent, neutralize risk factors that can lead to deviant behavior of the young people. The aim of this paper is to point out that it is necessary to act adequately and preventively, as early as possible, to prevent the emergence of deviant behavior forms of children and young people and, with the help of protective factors, strengthen the capacities of each child individually and thus prevent deviant behavior.