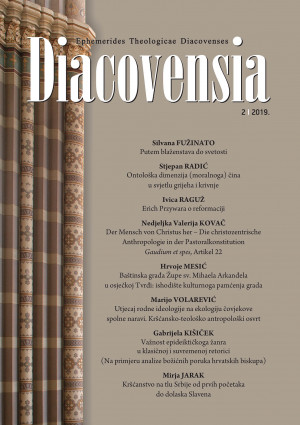 Summary/Abstract: The author tries to show how today man becomes more and more aware not only of the endangerment of man’s environment but of the endangerment of man’s innate sexual nature, as well. Man, created in the image of God as male and female (cf. Gen 1:26-27), is called not only to act responsibly towards the created reality God has given him, but also towards the image of God that is mirrored in him, equally in man and woman. In the same way that through history man hasn’t been responsibly governing the created world, of which he is a guardian and not a master, in a similar way today, with the help of gender ideology, he wants to dominate over the sexual nature that was gifted to him. With the article the author seeks to warn, in accordance with Christian-biblical-theological anthropology, about the fundamental defects of gender ideology which through theoretical technicism penetrates the very essence of man’s sexual nature, thus directly affecting the ecology of human nature and the ecology of family.