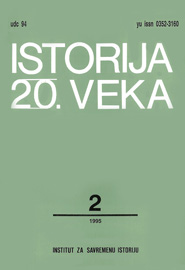 Summary/Abstract: In the first post-war years, the Serbs in Croatia appeared to enjoy the national rights for which they had fought during the war. Gradually, however, all the activities of Serbs which were publicly demonstrative of their national emancipation were reduced and then stopped. The Croatian political establishment marginalized and eradicated all institutions bearing the name »Serbian«. These institutions were removed from the centers of power but none the less their closing meant the eventual abolition of the civil and national rights of Serbs in Croatia. At the same time, rifts occurred among the Serbs which were reflected by political activities which created the illusion of equality between the Serbs and Croatians in the name of brotherhood and unity. All this clearly indicated the ultimate purpose - the expulsion of Serbs from Croatia.