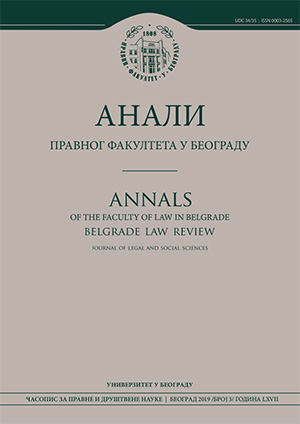 Pravo disolu cije u nacrtu ustava komisije jugoslovenskih profesora iz 1920. Godine
The Right of Dissolution in the Constitutional Draft Produced by the Commission of Yugoslav Professors in 1920

Summary/Abstract: The subject of this article are the theoretical views that determined the regulation of the right of dissolution in the Constitutional Draft produced in 1920 by the Commission of the most prominent Yugoslav legal experts. Having in mind the experience of parliamentary practice of controversial use of royal prerogatives, the Commission formulated a solemn proclamation of parliamentarism as a general interpretative principle, whose purpose was to establish limits of royals’ acts. The role of king in the parliamentary monarchy was conceived in accordance with the theory of parliamentary government, as a system of a constitutional balance of powers. The Crown was conceived as an moderating power, authorised to dissolve Parliament, when it is necessary to maintain harmony between Parliament and the ministries, but also as an extraordinary neutral authority, which may check Parliament’s omnipotence and intervene to secure harmony between the political character of Parliament and the inclination of electorate.