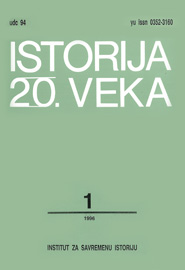 VOJNE FORMACUE U JUGOSLAVIJI I RAZORUŽAVANJE ITALIJANSKIH JEDINICA SEPTEMBRA 1943.
MILITARY FORMATIONS IN YUGOSLAVIA AND THE DISARMAMENT OF ITALIAN TROOPS IN SEPTEMBER 1943.

Summary/Abstract: On 8 September, 1943 German troops disarmed, mostly without battle, 170.000 and imprisoned 260.000 of approximately 360.000 members of Italian troops then present on Yugoslav soil, from Gorica (Goritsa) to Prespa. Some Italian units put up an armed resistance around Vipava, Split, Čapljina (Chaplina), Metković (Metkovilch), Trebinje (Trebinie), Dubrovnik, Cavtat (Tsavtat) and most of all in Montenegro, mainly in unison with units of the Yugoslav Army of National Liberation (NOVJ) or the Yugoslav Army in the Fatherland (JVUO). Almost all formations of the Blackshirts (MVSN - Milizia volontaria per la sicurezza nazionale) went over to the German side. The majority of the captured Italians were interned, while over a hundred officers whose units had resisted captivity were shot.