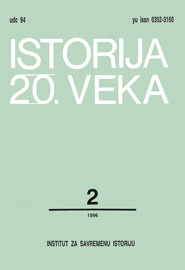 Summary/Abstract: The antagonistic activity of some members of national minorities in the Kingdom of Yugoslavia, which increased after the arrival of German forces at its borders in 1938, was a constant point of interest for the Yugoslav military intelligence service. Numerous reports arriving at General Headquarters and forwarded to the Ministry of Army and Navy', spoke of an extraordinarily strong tendency along »minority elements« toward activities aimed at undermining the Kingdom of Yugoslavia. However, the measures taken by the authorities against such actions were of a purely symbolic nature. Relations with the Third Reich, whose strength continued to grow, and the realization of the political situation in Europe imposed a course of action on the government of Stojadinović and Cvetković and on Prince Pavle himself which would not lead to an increase in tension with Germany, which usually stood behind the anti-Yugoslav activities of minority populations in the Kingdom. Consequently, the proposed actions of General Headquarters, sometimes quite harsh and radical, were never pull into effect and remained only as written proof of the anxiousness of pro-Yugoslav officers for the future of their country. On the other hand, actions taken by military intelligence independently or together with ally agents gave only partial results. This attitude towards national minorities bred in a spirit of hatred towards Yugoslavia and their destructive actions represented another piece in the mosaic of unsuccessful measures taken by leading political figures for the defense of the country. The events of the short April war were only further proof of their mistaken views, indecisiveness, differences of opinion and even open treachery.