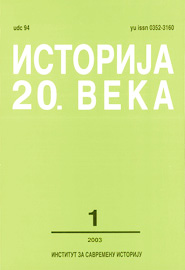 ХОРВАТСКАЛ ПОЛИТИКА В КОРОЛЕВСТВЕ СХС
CROATIAN POLITICS IN THE KINGDOM OF THE SERBS, CROATS AND SLOVENES

Summary/Abstract: “The issue of Croatia” was of utmost importance for the destiny of the Kingdom of SCS. The direct arena of Serbian-Croatian clashes were Croatian territories, united with Serbia in 1918. At the beginning of the 1920s, aspirations for integration of the Serbs in Croatia were directed by Svetozar Pribicevic. At the head of the Croatian separatist movement was Stjepan Radio. At the end of the third decade of the 20th century they kept the confidence of the masses but both of them altered their platforms. Once the irreconcilable opponents, they now became the collaborators. Pribicevic’s and Radic’s Union, so unexpected for their contemporaries, does not seem like that today. Since establishing the Kingdom of SCS, these “antipodes” challenged each other’s right to monopoly of representing, politically, Croatia in Belgrade and Europe but at the same time they contributed to strengthening each other’s position, knowingly destabilizing the country. At the end of the 1920s, the aspiration for revenge on the natives of Serbia, the need for finding their place while the parliament was in crisis and gradual usurpation of the power by King, forced the leaders of Croatian peasants’ party and Independent Democratic party to end their rivalry and establish a coalition named “Front of Vojvodina”. This way it was more convenient for them to lead the War against Belgrade and control the situation in Croatia.