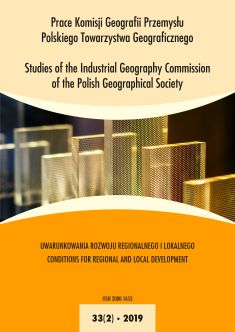 Summary/Abstract: The prospects and trends for the development of border regions of the former Soviet Union have become one of the profound research areas in the field of economic geography recently. In the conditions of planned economy in the Republics of the USSR, a vertical system of industrial complexes was formed, with the focus on performing national economic tasks. There have been some significant changes in the border regions of independent post-Soviet States in the process of transition to the market economy model. The analysis of the industrial and territorial structure is done on the example of Russia and Kazakhstan. The formation of a common market on the basis of the Eurasian Economic Union allowed the border regions to make the most of their competitive advantage in attracting investments. The unique geographical particularity of the research object is manifested in the fact that there are no analogues of the longest land border in the world as between Russia and Kazakhstan. The new forms of production organisation are implemented in the border regions of the studied countries over more than 7,000 km. More than a quarter of a century later, transformation processes are clearly observed in the mining and manufacturing industries, agriculture, transport and services. As a result, the “regional asymmetry” of industrial development can be observed when manufacturing regions with high added value become the “cores” of economic development of cross-border relations between Russia and Kazakhstan.