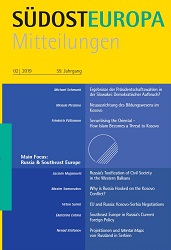 Summary/Abstract: The article discusses the so-called “traditional Russian-Serbian friendship”. This relationship between the two states is assessed as an “invention of tradition”. The contribution examines changes in Serbian society during the 1990s which brought about a new turn towards Russia. In the mental maps that had emerged in the context of new ethno-nationalism during the late1980s, the West had initially been central and served as evidence of an allegedly original love of freedom on the part of the Serbian people. This map stood in contrast to the other republics of former Yugoslavia that were seemingly “infested” by the Vatican and Germanophilia. The experience of sanctions imposed on Serbia in 1992 and the refusal to reflect on this experience led to a re-orientation of existing mental maps. The fixation on Russia had the function to spare individuals the question of responsibility for crisis and war. Even today, this mental map serves as a relieving function in Serbia and it is increasingly coming to the fore.