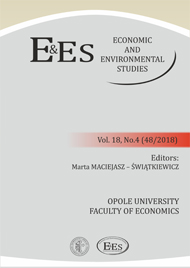 Summary/Abstract: The article is devoted to the issue of changes in standard of living, which were noted in the Member States that joined the EU structures after 2004. An attempt was made to capture the impact of EU policies on the level of living standards in the Member States. The time taken in the study covers the years 2004-2014. The year of the largest enlargement in EU history was adopted as the beginning of the period. The study used taxonomic methods, in particular the Hellwig development index.