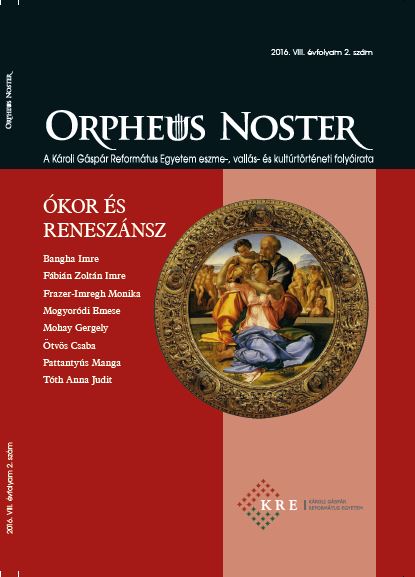 Summary/Abstract: In her excellent study on the Hymn to Hermes, Clay interpreted the text as a special creation myth. The goal of Hermes, the last-born among the gods, is to be accepted by the pantheon of the Olympian gods, and through this struggle he adds his principium, which is the ability of moving and changing, to the perfect but still static universe. In my interpretation, the theme of the hymn is not the ‘identity crisis’ of Hermes. Rather, the result of his actions is the integration of the periphery, of nature, of the titanic and chaotic aspects of the world into the order of the kosmos, as the last step of the creation. Hermes arrives from the peripheries of the mythical world: his ancestors are titans, his mother is a nymph, he was born from an extramarital relationship, he lives in the remote and primitive Arcadia. As a trickster deity he was issuing a direct challenge to the Olympian order, attacking his half-brother Apollo, and demanding his main divine function, divination. The poet presents the young god as a danger to the order of the Olympus, but at the same time he takes the edge off the conflict by the characterization of Hermes: he is a child for whom the meaning of truth is not the same as for an adult and the strict oppositions of the world are blurred in his mind. This quality is also the source of his creative intelligence. When he meets the turtle, for example, he sees the lyre, while Apollo is unable to recognise the lyre even when seeing it. In the context of the hymn Hermes is a counterpart of Prometheus correcting the sins of the Titan: he invents a way of lighting fire without stealing the possession of Zeus, he invents a new form of divine banquet without offending the gods as Prometheus did.