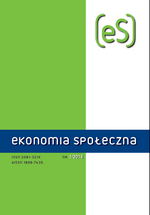 Summary/Abstract: Sharing economy is a socio-economic phenomenon consisting in the direct provision of services by people, co-creation and sharing of available resources. Its main purpose is to move from ownership to access. The purpose of the article is to present the phenomenon of sharing economy in the context of urban issues in the awareness of officials and entrepreneurs of the Świętokrzyskie Province. In the tests, which were both qualitative and quantitative, the method of diagnostic survey and two research techniques were used: in-depth interview technique and survey technique. The tools used to conduct the research are an interview questionnaire and a questionnaire. The sharing economy is a relatively low developed area in the Świętokrzyskie province. Confidence is one of the critical factors that enable the functioning of the sharing economy.