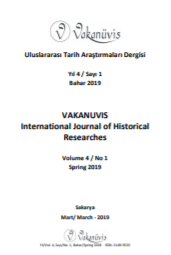 Summary/Abstract: Press, being one of the main branches of communication, has a important place in history for being a major source to social and political fields. Ottoman-Turkish press community still influences people and forms the public opinion to this day.In other words , newspapers were a instrument for government and opposition in Ottoman-Turkish political scene to relay their ideologies to the masses. In the last years of Ottoman empire, government used the press to secure constitutionalism, opposition on the other hand, used it to be the voice of the minorities outside of the ruling class.The brawl between government and opposition continued in the stories of newspapers. The newspaper called "Son Posta" which was active between 1930-1962, has shown supportive of the opposition wing and took a clear stance beside them.Its staff, being mostly unionist, wanted to bring Party of Union and Progress into the view and maintain its influence. Main goal of this project is to examine the motives behind the establishment of Son Posta and its social and politic aims and also to discover its place in the press world.