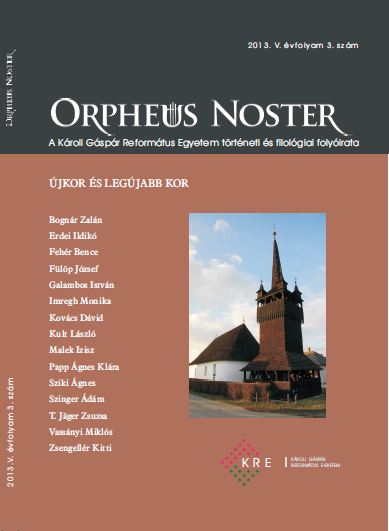 Summary/Abstract: In the summer of 2013 I translated Ferenc Pápai Páriz’s Illustris Collegii Betleniani [sic!] Albano Enyediensis Origo et Progressus (1704) from Latin into Hungarian. This manuscript was recently transcribed by Emese Rácz and will be published as a bilingual critical edition in Cluj, Romania (Kolozsvár) by the publisher Erdélyi Múzeum Egyesület Kiadó. The history of this great Transylvanian college has never been published or translated before in its entirety, only the correspondence between Pápai and Jablonski about the scholarship for Hungarian students in the Viadrina University in Frankfurt (Oder). (Pápai requested it with Jablonski’s help from the Elector of Brandenburg, Frederick III, later Frederick I of Prussia). In my paper I summarize the issues that emerged during the translation. First, I review all the Greek expressions Pápai used in his Latin text because some of them were not understood and simply omitted by the letters’ previous translators. I also point out some other mistakes in the translation of the letters. Secondly, I unravel the question of the two letters of the Transylvanian chancellor, Miklós Bethlen, to the Brandenburg court, that were published as three letters in the previous edition. Finally I publish and explain Pál Csernátoni’s epitaph written by Pápai and included only in the Origo, which is rather unusual in its metrical form.