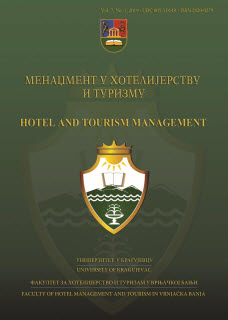 Summary/Abstract: Investments in tourism are crucial for the development of both tourism and other activities that are directly or indirectly related to it. Despite the immense potential of tourism, the insufficient development of infrastructure appears as one of the reasons that diminishes the role of tourism in Serbian economy. It is therefore of great importance to invest in infrastructure development in tourism. The subject of this paper is to compare Serbia with the countries in the region of Western Balkan and with several other European countries (Germany, France, Italy, Austria, and the Netherlands) in terms of the level of capital investments and employment in tourism. The insight into the amounts of investments will show the position and perspective of Serbia in relation to the countries in region and Europe. By adopting the measures of investment policy in tourism and associated incentives, Serbia will create the climate that will increase the amount of capital investments in tourism, which will have a multiplier effect on employment and also the entire economy.