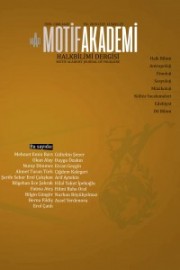 Summary/Abstract: Socialist-realism is one of the modern arts and literary trends. This flow, which first appeared with the The Mother novel of Maksim Gorki in the context of artistic / literary work, was systematized in line with the decisions taken at the 1st Congress of Soviet Writers in Russia in 1934 and accepted as “official” art / literary understanding of the same country. In short, this current is explained as “the reflection of Marxism in art and literature” and it began to find an echo in the Constitutional’s last years in Turkey, at the end of the 1920s gained momentum Nazim Hikmet and has been among the dominant currents of Turkish literature until the 1980s. However, significant differences were seen between the aesthetic perception of the socialist-realist poets and writers in Turkey. As a result, more than one socialist-realism concept emerged in Turkish literature. One of the prominent among these is the aesthetic conception Attilâ Ilhan calls “social realism”. “Social realism” can be seen as a result of an effort to create an original socialist-realism theory and practice. In this article, social realism will be dealt with from the texts of Attilā Ilhan's ‘İkinci Yeni’ Savaşı and Gerçekçilik Savaşı, and basic principles will be tried to be determined on this subject.