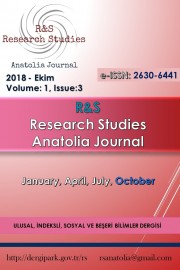 Summary/Abstract: From past to present; people have been forcing to change their settlements due to issues such as war and famine. One of the current problem of todays Turkey is the migration of Syrian citizens to Turkey. This study aimed to learn about the views of Turkish people’ about Syrian refugees. 14 university students voluntarily participated in the research for this purpose. Researchers used interview technique, which is one of the data collection methods of qualitative research, with semi-structured interview form to collect data. Content analysis and descriptive analysis methods were used for analysis of the data. The subtitles reached as a result of the analysis are gathered under two thematic Titles. First one consists of subtitles that are found out based on the components of the attitude using the deductive approach. Another theme called “Results of the presence of refugees” found by using induction method. Attitude theme consists of three subtitles, these are; thinking, behavior and emotional Subtitles of the results of the presence of refugee’s theme are; economy, cultural- social and solution proposal. Further studies should be conducted about the views of Syrian refugees.