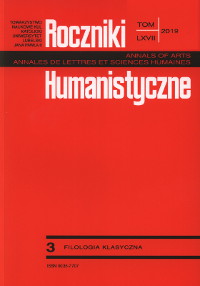 Summary/Abstract: The article is devoted to the relationships of rhetoric, philosophy and medicine. The first part concerns the Greek (especially sophistic) roots of dependencies occurring between these domains, processes of penetration of the medical topics into ancient literature and principles of mutual interactions. The purpose of this presentation is to show the ground and find the justification for the fact that medical terminology and medical threads are frequent in the rhetorical discourse of the early modern age, especially in humanistic philosophical literature, focused on verbal therapy and convinced of the healing dimension of the word. The case of Erasmus of Rotterdam was considered particularly interesting for these diagnoses, hence the work of this humanist has been the subject of research in this work. Therefore, attention was drawn to the rich representation of medical motifs in the works of Erasmus, the presence in the author’s texts of imaging, terminology and medical topics, broad interest in the field of medicine, which is reflected in references to Galen’s work and translation of his writings by Erasmus. The most important and the most interesting, however, turned out to be the text in which the medical nomenclature became an aesthetic and ideological component, influenced the shape of the entire discourse, its argumentative platform, influenced the persuasive fabric of the work and at the same time participated in building its philosophical pronunciation. Lingua – the apologetic work of Erasmus with clearly didactic meaning, and at the same time strongly permeated by the epideictic manners of the sophistic diatribe – belongs to this kind of writings.