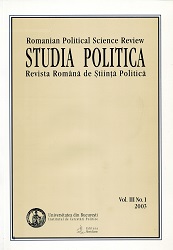 Summary/Abstract: The purpose of this study is to investigate, from an intellectual and legal perspective, a historical interval (1938-1940), in which the Romanian constitutional system underwent a dramatic transformation, from a relatively stable parliamentary democracy to a regime characterized by a single party state and the confusion between the three branches of the government. In doing so, the present paper has chosen to place in sharp contrast two kind of attitudes defining two different approaches towards constitutional law and legal order. The distance between the authoritarian approach of Armand Călinescu, king Carol's home minister an prime minister, and the constitutional critique put forward by Iuliu Maniu underlines the importance of a perspective which would embrace the whole set of options, as expressed during this given period. This political and legal confrontation, opposing two visions concerning individual liberty and political representation, paves the way for a future in which the dilemma between the rule of law and arbitrary became a dramatic one, involving the entire political community.