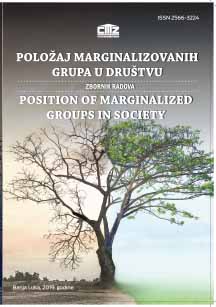 Summary/Abstract: Labeling is a natural and innate process by which our brain tries to divide information that is more important to us than those that are not so essential to our previous experience, and thus makes life easier and shortens the process of information processing. In this process, it is often the case that we accidentally "put a sticker" on some person based on some of their traits, and thus we create an attitude on that person, behave according to the label, and according to some labeling time research may result in permanent change in behavior according to the label obtained. Such a phenomenon R. Merton called a self-fulfilling prophecy. Some social groups are more susceptible to labeling and stigmatization, and one of them is a person of deviant behavior. Deviating behavior, as a rule, does not mean at the same time criminal behavior, that is, behavior that deviates from the expected pattern of behavior, does not follow norms, i.e. does not follow the formal behavior of a society. Criminal personality can also be called a deviant, but a deviant is not a criminal, but if we personally label it sufficiently, we marginalize and reject it from a dominant society, or culture, might look for "similar to oneself" and society that will accept it as it is or a society that is really of a criminal nature, reconciling with its attributed status and beginning to behave according to the behavior expected of the group we have identified with it.