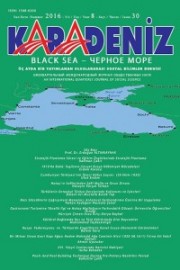 Summary/Abstract: When following the Bolshevik movement in 1920 Azerbaijan lost its independence, which was achieved after the October Revolution of 1917, she restarted its struggle for independence. Leaders of Azerbaijani nationalism in pursuit of independence continued to work towards their targets in different countries through different ways and methods. In this struggle, Azerbaijani nationalists occasionally came together with representatives of other nations that share similar fate, and the struggle against Soviet government created a natural ground for moving different elements of various nations together. The Shura of the Caucasus Confederation is an experience of this context in the 1930s. The experience of the Shura of the Caucasus Confederation, against the common enemy on the axis of the Caucasian common identity, of the "National Liberation Movement of Azerbaijan" under the leadership of Mehmet Emin Rasulzade together with Northern Caucasus Turkish nationalists and the Georgian Mensheviks is a remarkable example in terms of understanding the process of Azerbaijan's independence struggle in the 1930s.