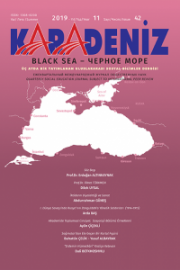 Summary/Abstract: Since its foundation, Ottoman State classified and recorded in the Tahrir Defterleri (Tax Registers) the territories it conquered according to their revenues. Based on these records, researchers endeavour to have estimated demographic data on the Ottoman State. Similar practices continued as part of other practices in the later periods of the Empire such as Avârız Defterleri, Temettü’ât Defterleri, etc. In the Ottoman State, the first census in modern sense was conducted in Anatolia and Rumelia provinces during the reign of Mahmut II in 1831 (H. 1251). This census included only male population. It appears that the census starting in 1831 continued for 3-5 years. At the time, the census in Ardanuc sanjak of Cıldır province was carried out in 1251 in the Islamic calendar (A.D. 1835). This census recorded Muslim and non-Muslim populations in central Ardanuc and its villages. Ardanuc register of 1835 including Muslim, non-Muslim and Copt registers provides information about the male population in a total of 48 settlements with Ardanuç Kal’ası as the centre in Ardanuc sanjak. Some of the villages mentioned in the study may not be within the borders of Ardanuc municipality today.