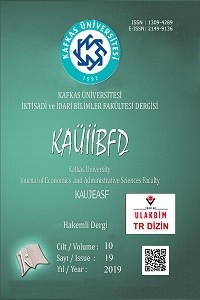 Summary/Abstract: In 1826, upon the abolition of the Janissaries, the census was carried out in order to meet the military needs of the state and to determine its financial status and started to be recorded in the population books of Muslim and non-Muslim men. The first general population census was completed in 1831 in the Ottoman territory in this sense, and later the records were updated in the form of population surveys. When the population books kept together with the counts started to be sent to the center, organizational structures related to the subject started to be formed in Istanbul and in the provinces. Kütahya was the center of the Anatolian Beylerbeylik since the second half of the 15th century and the center of Hüdavendigar province since 1841. In the Prime Ministry's Ottoman Archives, Hüdavendigar State, Kütahya Sanjak, Kütahya Kazası Reaya Population Book and the book registered with NFS.d./1622 are the most important sources for the determination of non-Muslim population living in various parts of Kütahya accident in 1834. Based on this book, an examination and evaluation of the non-Muslim population living in Kütahya was carried out in this study.