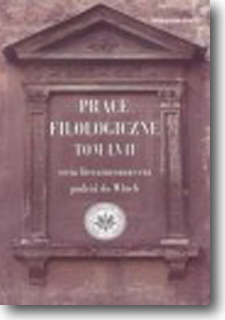 Summary/Abstract: The article presents an unknown aspect of Polish-Italian relations in the 19th century. The Poles and Italians of the 19th century shared feelings of solidarity with each other. Both nations fought for the independence of their countries. The literature of these countries at the time frequently eulogized the heroism of soldiers who fought under the slogan “for our and your freedom”. The Italians were heroes of the Polish uprisings, and Poles fought for the Italians. The Poles supported Garibaldi and Victor Emmanuel in their fight against Austria, because Austria was also Poland’s enemy. However, during the fights over Rome in 1870 Poles fought for both sides. Some served Garibaldi, and others defended the Papal States and the secular power of the Pope. The memoirs of one papal zouave survived. Its author, Adam Morawski, published his recollections from Italy and from the times of the fight for Rome several times and under several different titles. His memoirs were popular in Poland in the second half of the 19th century. They depicted the political hopes of Poles who assumed that only the Pope’s political pressure on Russia, Prussia and Austria could save Poland from repressive measures. As a historiosophic concept, Morawski’s views represent a delayed voice of Romanticism. Describing Italy, the author was looking for evidence to support the thesis that the pagan Rome collapsed, because the people did not believe in God. The world of his time reminded him of the agony of Rome. This moralistic philosophy links Morawski with Zygmunt Krasiński.