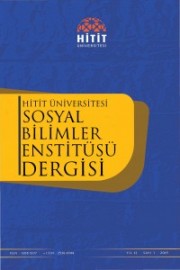 Summary/Abstract: The elements of nature have been important to man since the beginning of life. So much so that in the myths about creation, the first person was the result of water and soil opposed to a cave. From the earliest mythical accounts to the folk poetry, nature was in particular an integral part of earth's existence. The minstrel together with nature used all the elements of nature while conveying emotions and thoughts in their poems. The tradition of minstrelsy is one of the fundamental dynamics of Turkish oral culture tradition. Kam, Bakshi, and minstrels who were the successors of poets in Anatolia, kept the cultural codes and transferred them to the next generations. In this context, minstrels have important functions in terms of continuity of Turkish culture. Veysel Şatıroğlu who was born in Sivrialan village of Sivas in 1894, lost his eyes because of smallpox. He plays with the instrument that he has used to play with his father. The blindness of his eyes and the pain he suffered make him mature in his art. Minstrel Veysel is a minstrel who has a clear and clear expression of her thoughts and feelings by using Turkish in a pure and clean manner.