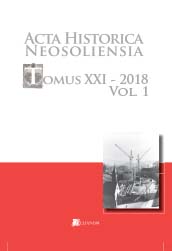 Summary/Abstract: This article presents published translations of letters of bishop of Banská Bystrica Štefan Moyses to a university professor and head of Royal Academy of Legal Science in Zagreb Pavao Muhić (collection of letters during 1861 – 1867), Bosnian and Srijem bishop Josip Juraj Strossmayer (in 1861) and also a letter to a bishop of Zagreb, Juraj Haulik (in 1853). Letters clearly point to close association of Moyses to addressees. Bishop Moyses often describes there his political attitudes, situation in the diocese administered by him but also his age and health. In addition, the letters also depict relation of Š. Moyses to P. Muhićs family and complete the findings of J. J. Strossmayer activities on the side of the Slovak National Movement.