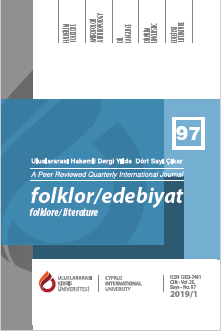 Summary/Abstract: Studies conducted on the Turkish dialects in Turkey dates back to the mid 19th century. First studies are the publications of researchers living out of Turkey and were mainly based on publishing text compilations. Later on, the studies on compiling the dialects of the regions and examining their language characteristics gained importance. The Thrace region and especially the western part of Thrace seem to be neglected when compared to the conducted studies made on Anatolian dialects. This study is an attempt to apply the criteria in the classification of Anatolian Dialects put forward by Leyla Karahan to the dialects of Xanthi and Komotini which are a very important part of Western Thrace Turkish dialects. In the study, Xanthi and Komotini dialects were evaluated in terms of “Features Determining the Main Dialect Groups” specified by Karahan in her work. The Eastern Group, the Western Group and the Northeast Group were addressed in this evaluation and their distinguishing features were revealed. Western Thrace Turkish dialects have also been examined in terms of these distinguishing features. The results of the study are presented in tabular format. The Evros region of Western Thrace was not included in the study.