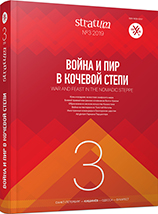 Summary/Abstract: The article deals with the emergence and spread of combat hatchets in the territory of the Saka culture of Tien Shan region. It was a formidable weapon, which made it possible to effectively fight against the armor-protected enemy, but in the course of the Saka period it was a rare weapon in this region. There are only four known finds of this type of weapon in Tien Shan region. Three of them come from the burials associated with the aristocracy and the fourth one was found in a rich hoard of bronze things. The analysis of combat hatchets from the area of Tien Shan region showed that this type of weapons existed here in 2nd half of 6th — 3rd centuries BC. The combat hatchets appeared in this region as a result of close cultural contacts with Kamen culture of Forest-Steppe Altai, where they find closest analogies to them.