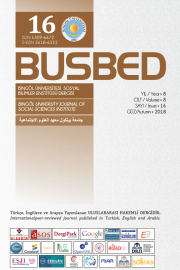 Summary/Abstract: National holiday as a phenomenon is one of the principle concepts that manifest the shared joys and values of societies. During the transition period from the Ottomans to the Republic, having celebrated no national holiday apart from the “Iyd-i Milli” forged some problems. One of the ways to help ensure the survival of a multi-national empire like the Ottomans are either holidays or religious themes or having a common history. However, these three realities were vague concepts for the Ottoman society. During the restructuring of the state after post-National Struggle, particular importance was attached to national holidays as a means to make the nationalization process concrete and to ensure the adoption of the regime. It was decided to celebrate April 23rd, the day of the Assembly’s inauguration, as the “National Sovereignty and Kids Holiday”; May 19th, the day when Atatürk arrived Samsun, combined with the “Sport Holiday” that was inherited from the Ottomans, as the “Commemoration of Atatürk, Youth and Sport Holiday”; October 29th, the date when the Sultanate was abolished and the Republic was proclaimed, as the “Republic Holiday”; finally August 30th, when the Greeks were defeated, as the “Victory Holiday”. This work encompasses the process from 1935, the milestone of officially celebrating the holidays, to 1950. The holiday excitements experienced in this process in Urfa is presented as reflected in the local newspapers.