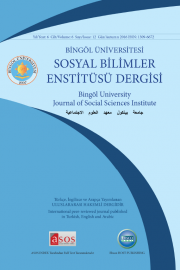 Summary/Abstract: This research is interested in studying the poetry of Umayyad Princes of Andalusia, in the ages of both Umayyad Emirate and the Umayyad Caliphate ones. The aim of this study is to provide a picture of the princes of Umayyad in Andalusia through what came to us from poetry; it is no secret that this will be important because it is a historical document recorded by the prince or caliph tongue. And through it; we can imagine the political, social and cultural conditions in the Umayyad emirate's age and the Caliphate age. We will compare those poems and come in the historical sources of those prince's biographies, look between the poetries and the sources of consensus and differences. We will discuss the cases of princes in poetries of Umayyad princes from three aspects: • Nostalgia in poetries of Umayyad princes in Andalusia. • The method of consolidating the state in Andalusia through poetry. • Pride in their poetries and its relation to governance.