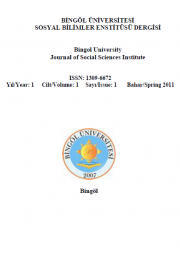 Summary/Abstract: This study seeks to explore the images of Turks as a non-european other in the works of Lawrence Durrell. In his works, Durrell shows how representations of cultural difference are inextricably linked to representations of sexual difference. Thus Durrell’s Europeans are surroundered with an aura of colonial power, erotic potency, and easy penetration into the spaces of the other while Turks are reprented as feminized, emasculated and humiliated. The images of the European White man and non- are dependent on the negative image of Turks ,the other. In exactly the same way, Istanbul ispresented as a city of decadence and decay, a place where decent human values broken down and where individuals survive by their wits abilitiy to dodge or swindle.