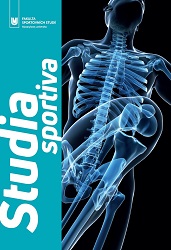 Summary/Abstract: The aim of the study was to ascertain information upon the occurrence of hypermobility as well as the symptoms of light brain dysfunction in rhythmic gymnasts and to prove their relationship. The research sample consisted of 78 girls from rhythmic gymnastics teams from the Czech Republic with average age 12,81 ± 2,47. The study used deliberate selection on the basis of chosen criteria: women, age 10 – 18 years, at least 5 let of specialised training in rhythmic gymnastics, week load at least 10 hours. The diagnostics of hypermobility used the method of measuring joint range with the aid of goniometer. The range of the movement of hip joint was measured and Janda test. The diagnostics of mild brain dysfunction diagnostics used orientation brain tests. It is the test of tax, which is aimed upon the proper aiming of movement, test of diadochokinesis, which is aimed at the ability to perform alternating movements, and the test of stability using Romberg pose on a balance platform with open eyes. The results of the goniometric measurement showed a significant flexibility of the gymnasts, mainly in the area of their hip joint (flexe right hip joint 161,09 °; ± 14,78 and flexe left hip joint 158,54 ° ± 14,05). When diagnosing mild brain dysfunction using tax, in both the upper and the lower extremities, no pathology was ascertained, on the contrary, however dysdiadochokinesis was found in 7 gymnasts. The results of the Romberg pose on the balance platform were mildly above the norm (compared with general population), nonetheless, the 7 people with dysdiadochokinesis showed results under the values of the general population. The people with dysdiadochokinesis, also showed worse results in the Romberg pose on the balance platform, as well as the symptoms of hypermobility, which where proved by goniometric examination.