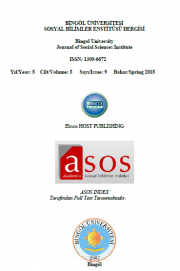 Summary/Abstract: Many women from different ethnic backgrounds in the United States of America suffer from many inequalities in the male dominated society. Among these ethnic groups, Mexican American women suffer from certain inequalities. Ana Castillo with her work So Far From God (1993), Isabel Allende with her work Paula (1994) and Sandra Cisneros with her work The House on Mango Street (1984) become the voice of these ethnic women. The analysis of their works will reveal the common problems of the women and the suggestions these authors put forth for these problem. For the analysis of three works, the theoriesas feminism, ethnicity, identity and narration techniques will be explained. The feminist perspectives, representation of ethnicity, identity of women and narration style in the novels will be analyzed. Finally, the analysis of three works will reveal the way society restricts women, especially ethnic women and the way women resist this oppression.