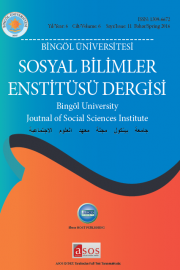 Summary/Abstract: Being one of the poets in Tanzimat Literature, Abdulhak Hamid’s religious perception was affected by the miserable events in his life, his educational experience and also the period of time in which he lived. In his book “Sahra”, his approach to the nature gives him a pantheistic and a kind of imitational (simulative) interval on faith. Because of the effects of western culture and the deaths of some people who are very close to him, he becomes sceptic and rebellious to God. He sometimes questions the true nature of the existence philosophically. Doubt and submission both go together during those questioning in his mind. Sometimes he can be seen agnostic at the times. His philosophical questionings can’t find any better solution for him expect from choosing the submission to the infinite omnipotence of God.