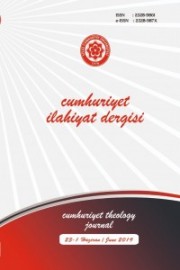 Summary/Abstract: Salafism is one of the most important issues of the last few centuries. There are intense discussions on the issues related to Salafism, its emergence, how it was first used by whom and in what sense. Discussions about Salafism are sometimes experienced in relation to whether this concept corresponds to a mentality or to a sect, and sometimes this phenomenon is brought up in relation to a number of important names that have taken place in the history of Islamic thought. Ibn Taymiyya (d. 728/1328) emerges as the most frequently mentioned name in this context. Therefore, in this article, we have examined how Salafism/Salafiyya concept is used in the works of Ibn Taymiyya who is accepted as the theorist and the most powerful representative of Salafism. We have discussed the issue in a comprehensive manner by including the concept of Salaf, which is one of the most used concepts of Ibn Taymiyya. When we consider Ibn Taymiyya's use of the concepts of Salaf and Salafiyya, the concept of Salaf is seen to be used much more than the concept of Salafiyya. Thus, the concept of Salaf in the thought of Ibn Taymiyya refers to the Islamic society that lived in the early centuries and the conception of religion revealed by this society. The concept of Salafiyya, however, appears to have been used in a way that reflects a mentality and a way of thinking rather than a particular school or sect.