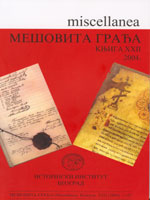 Summary/Abstract: The document refers to the financing of the Belgrade Fortress reconstruction in the year of 1565. Reconstruction was implemented due to heavy damage caused by gunpowder explosion in the Upper Town warehouse provoked by lightening. The works were financed by different incomes from the territory of the Belgrade nezareti, more precisely from Belgrade and Osijek ferry, rice fields of Niš, Kučajna mine and Karlovac imperial domains (haslar). The total amount was 290.000 akçes. The document preserved in the Prime Minister’s Archives in Istanbul, in the series Maliyeden Müdevver Defterleri (no. 2775/84), is the summarized copy of the imperial decree issued on 9 August 1565.