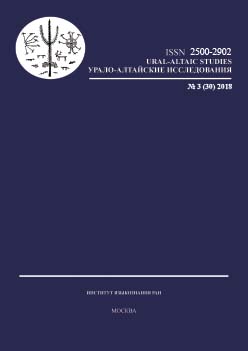 Summary/Abstract: The article deals with the orthography and linguistic evidence provided by Viktor Vishnevsky’s “Načertanije...” (“Inscription”), one of the most famous Chuvash books from the first half of the 19th century. This text is shown to have induced a large number of spelling techniques that were used in Chuvash literacy until as late as the 1860s. Linguistically, “Načertanije...” is not identical to any of other previously studied texts in pre-standard Chuvash; frequent forms with parallels in the northwestern extremity of the Viryal dialect area coexist with a smaller number of forms that can be associated with the central part of the Chuvash-speaking area. This provides evidence of a dialect shift occurring somewhere in the linguistic history of the so-called Anat Yenči varieties of Chuvash.