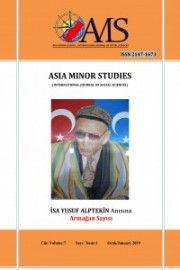 Summary/Abstract: In nature, a self-growing plant, buckthorn is one of the most important sources of natural dyestuff. In the Ottoman period, it was used to obtain yellow color particularly in thread and fabric dyeing. Due to the color and economic value obtained in the Ottoman Empire, buckthorrn, namely “golden tree” made significant contribution to economy of the region where it was grown. It was also included in the Ottoman foreign trade, although to a lesser extent than the root paint. However, the paint industry which developed in the 19th century adversely affected the buckthorn production in the Ottoman Empire. Even though it is a self-growing plant, we see that buckthorn orchards were formed in the regions where it was grown. Furthermore, in order to increase the production in these regions, the help of the skilled persons was needed and initiatives were taken in this direction. In our study, the place of the buckthorn used as a coloring agent in the Ottoman economy and why and how it was affected by the cyclical changes were evaluated. In the study carried out on the axis of archival records, it was also determined what kind of disputes the buckthorn producers experienced.