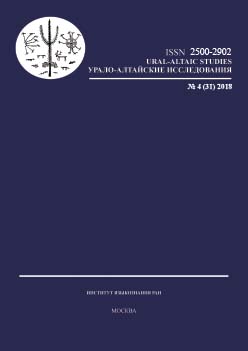 Summary/Abstract: The paper presents a morphological description of one of the first written monuments in Southern Selkup, recorded by Bishop Macarius. The first solid comments and handling of the script were made by Hartmut Katz. Nevertheless, until now there was no consistent and structural analysis of its morhology. The paper deals with the description of the following categories: number, case, possessivity, animateness / inanimateness. It also discusses predicative, adjectival and adverbial noun forms and noun formation. In addition, the data obtained were analyzed in comparison with the well described morphology of the Southern, Central and Northern Selkup dialects.