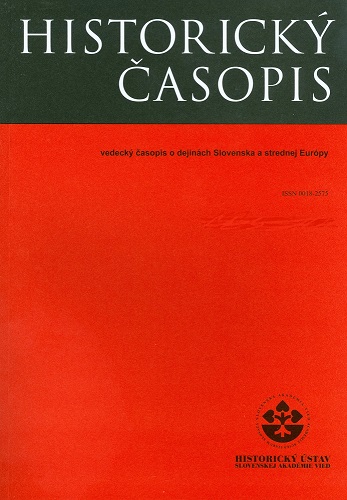 Summary/Abstract: The study analyses how the prevailing situation in Slovakia during the first months of 1919 was reported in part of the official or more informal correspondence between Ivan Markovič and Vavro Šrobár on the one hand and Edvard Beneš on the other. Some specific material problems occurred and the Czechoslovak authorities faced the reluctance of part of the civilian population. They also had to cope with the Italian military mission that was widely considered unreliable and Hungarian-leaning. The core of the correspondence is made up of considerations on the material and political uncertainties arising from the lasting shortages, the weakness of the nascent Czechoslovak apparatus and the latter’s difficulties stabilizing the situation in the whole region (and more specifically in some counties). As the weeks went by, the importance of a final decision regarding the borders with Hungary was firmly underlined, while the Slovak authorities were poorly informed on the overall diplomatic and political situation in Paris. Meanwhile, Slovak political Catholicism remained ambiguous and led agitation challenging and potentially weakening the Czechoslovak authorities. Markovič’s correspondence expresses the instability of the Czechoslovak authorities’ positions, shifting between partial improvements and lasting difficulties. At the end of April 1919, the overall situation remained precarious.