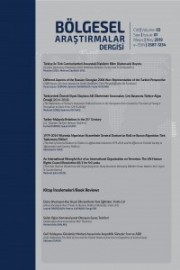 Summary/Abstract: This study examines the role of General Rashid Dostum in political life of Afghanistan between 1979-2014 and its effects on Turkish society in Afghanistan. The study investigates the subject under three main titles. Firstly, the position and importance of Dostum in political life of Afghanistan before 1991 is examined. In the second part,information on the role of Dostum in the period of civil war and the struggle against the Taliban is given. Finally, the effect of Dostum and Turks on the Constitutional Loya Jirga is analyzed. Accordingly, some suggestions are presented in order deal with the problems that Dostum and Turks of Afghanistan face nowadays.