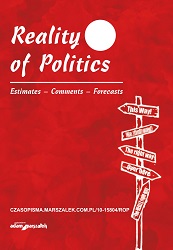 Summary/Abstract: The subject of this article is the analysis of the conflict between the Russian Federation and Georgia in 2008. The conflict has opened a new stage in Russia’s strategic drive to make decisions and implement them in areas recognized as important for the security of the country, even if they are outside its borders. The Georgian case clearly indicated that Russia wants to maintain its dominant position in the entire post-Soviet area. The region of the Caucasus remains an extremely important area for Russia, where it wants to maintain strategic control. The author proves in his article that the main determinants influencing the policy of the Russian Federation in the Caucasus region are: maintaining the greatest possible impact on the internal situation of the countries of the region, the maximum hindering possible integration with the Euro-Atlantic structures, the largest economic dependence on Russia, taking control over key sectors of the economy, maintaining military presence, isolation of the North Caucasus from Georgia, maintaining a monopoly on energy supplies, interest in Azeri mineral resources, striving to take over control of natural gas transport. The Russian-Georgian conflict of 2008 was one of the elements of Russia’s demonstration of the consequences of maintaining its dominant position in the post-Soviet area. The sphere of influence extends not only to Eastern Europe but also to the socalled Putin’s doctrine extends, in fact, to the entire area of the former USSR.