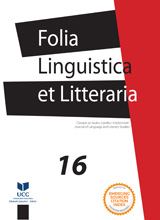 Summary/Abstract: Modern trends in the Anglo-American literature can take a form of selection of the ever-popular themes which are close to the vampire fiction. This paper studies the context of the mythical code which produced the first vampires, thus providing the basis for the emergence of the literary ones. All the vampire characters have some archetypal vampire properties: they were created by human transformation, they feed on blood, they are immortal, but still dead, and they are extremely strong and agile, with keen reflexes and reactions. Gothic literature was the ideal frame of reference for the emergence of almost canonical vampire fiction such as the novel Dracula (1897) by Bram Stoker. It portrays the vampire as an incarnation of pure evil, i.e. a metaphor for a demon in the form of a bloodthirsty man. The vampires of the new millennium from the Twilight tetralogy (2005–2008) by Stephenie Meyer are no longer markedly demonic nor do they solely have the role of the scary ones. They are more human than the previous vampires, are ethically mature and established, they additionally have a sense of guilt and remorse and are conscious of their own sinfulness and reasons of their own marginalization. They emerge as romantic figures of outstanding adaptability, a quality which is necessary to the human of the new millennium; hence, the creatures like vampires are helping the humans achieve an insight into reality.