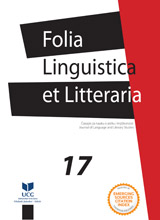 Summary/Abstract: According to modern criticism romance can be considered the most distinguished genre of medieval composition. It was created from numerous sources and its “heritage” in literary history has been enormous.Nathaniel Hawthorne’s vision of romance was rather different from traditional romance. Hawthorne was a psychological romancer preoccupied with the themes of alienation, sinfulness, moral downfall, infamy and guilt. Typical Hawthornian romances embody a highly dichotomized world burdened with the past, shrouded in an air of mystery, only suggesting but never giving the precise or “the most appropriate” meaning of the text. These romances express a series of antagonisms, ambiguities and allusions. The aim of this paper is to show the most relevant features of Hawthorne’s romances which distinguish this writer from his peers in the age of American Romanticism primarily commenting on essential dualisms, the specific use of archaisms as well as discussing the very genre of romance.