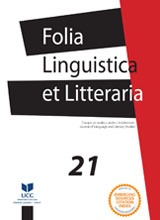 Summary/Abstract: The purpose of this paper is to analyse the path which Sandra Cisneros’s characters from the short story “Little Miracles, Kept Promises” undergo in order to overcome the gap between the demands of the new world which denies their former identities and the tradition which forces them to maintain former patterns and live within the past forms. The main focus is placed on Rosario and her cyclic path from deconstructing to reconstructing broken identity; the path which makes her fight the battles of rejection, confrontation, understanding and finally acceptance of what was once considered unacceptable.