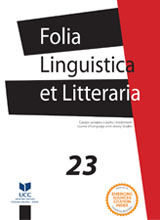 Summary/Abstract: Any attempt to compare and contrast the poetics of modernism and postmodernism must focus on the important question of the authorial principle, more precisely, on the relation between the author and the textual creation, as a more or less autonomous artefact. This paper will, therefore, deal with a possible understanding of this phenomenon, exploring it, on the one hand, through the work of one of the most important authors in the modern English literature – James Joyce, while, on the other hand, it will reflect on narrative procedures of one of the most popular post-structuralist practioners of the second half of the 20th century – John Fowles.