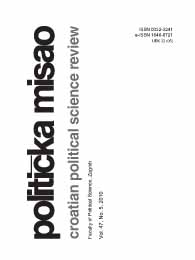 Summary/Abstract: The paper critically assesses the main approaches developed within the theories of post-communist transitions in the 1990s by looking at early works of Przeworski, Fukuyama, Vanhanen and Schöpflin. The author argues that the post-communist transition theories departed from the original understanding of transition, as developed by O’Donnell and Schmitter in the 1980s. Instead of focusing on explaining the past, the post-communist transition theories constructed themselves as primarily normative, ie. forward-looking. They adopted key elements of ‘objectivist’ and normative approaches in analysing political actions. In order to emphasise this anticipatory approach to analysing political and economic transformations, the new ‘transitologists’ described transition as ‘transition to democracy’, rather than ‘transition from authoritarianism’. The author argues that some of the (self-admitted) failures of anticipatory transition theories in predicting events that led to 1989 in Eastern Europe were primarily due to their ‘objectivist’ approach in analysing political actions.