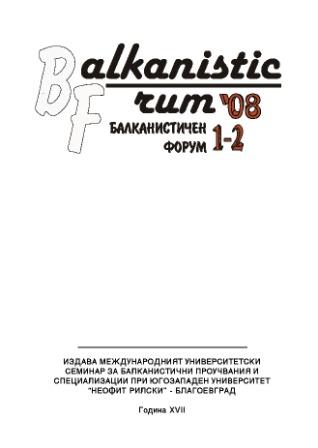 Summary/Abstract: The article analyzes the social and psychological nature of the Homo Scribens of the Bulgarian Revival (XVIII-XIX century). The second part of the XIX-th century is at the center of my research but part of the Pre Revival period has also been analyzed. The self narratives of Konstantin of Preslaw, Paisij Hilendarsky, the priest Puncho from the village of Mokresh, Emanuil Vaskidovich, Neophyte Bozvely, Neophyte of Rila, Vasil Aprilov, Petko Slavejkov, Ivan Bogorov, Onuphrij Popovich, Ilija Blaskov, Nikola Kozlev, Sava Dobroplodny, and others have been commented. I directed my attention to the theoretical literature ideas about (auto)biography; to the ways both the proto biographies and the autobiographies of the Revival intellectuals influenced the modeling of the Revival social images about what a life trajectory and self narrative should be. The following basic thesises have been commented and argued for: 1/ The writing practice and the ideas about writing in the XIX century reflect the coexistence of the Middle Age and Modernity features. The Coexistence could be noted in the writings of all intellectuals, in the economic and social features of the Homo Scribens of the Revival. 2/ The literature public space was formed comparatively lately - about the middle of the XIX-th century. Its most dynamic zones were based on the social benefits of the content of the hand written/printed literature, not on the figure of the author. "The populare poet" was figured as a responder to the social expectations, distancing in this way the Revival author form his modern identity. 3/ The profession of the writer was not a prestigious one since it could not provide sufficient incomes. Most often writing was not a basic occupation. The features of the social background determine the immaturity of the modern author identity. 4/ In the self narratives the Homo Scribens used the language clichés of the Pre Modernity. The self gestures were scattered around in marginal notes, prefaces, afterwards, memoirs, and diaries. As a form of self expression the autobiography was not popular. Its features were strongly influenced by the non literature ideas about what a autobiographical trajectory and biographical narrative should be.