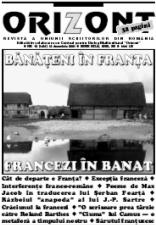 Francezii din Banat
The French in the Banat

Summary/Abstract: Mrs. Smaranda Vultur's research has an intriguing topic: how and when have some people from Banat reached Roche-sur-Pernes, a village in the South of France? The researcher recounts the adventure of this transmutation, as found out during her field research. The story begins with a salutation of the arrival in Avignon of the first "colonisers" from the Banat, dating back to 1951.The traject takes the reader to various villages, both in France and in the Banat, retracing transcultural fascinating journeys. The article features an interview with Philippe Willer, member of the first French family to have settled down in the Banat area. The second page of Smaranda Vultur's contribution continues the journey through memory, with the help of the interviewee, Phillippe Willer, who recounts his childhood in Banloc, with particular emphasis on the people and the customary activities of the region. The man tells stories of his familiy (currently scattered all around Europe), remembers his learning French and his fleeing from Romania during World War II.THe interview was taken in La-Roque-sur-Pernes, April 1999.