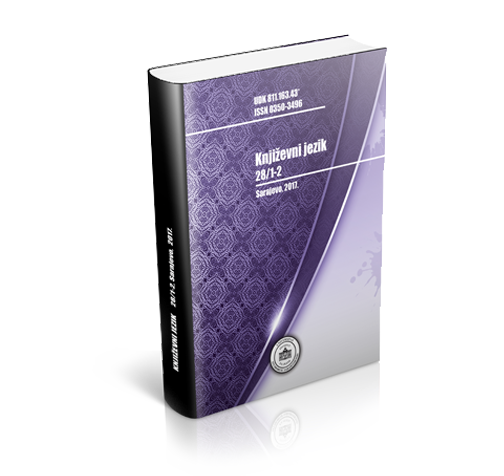 Summary/Abstract: Since SC orthography applies the morphophonological principle in the writing of iota, it is important to establish its morphological distribution. For our morphological analysis we used material from Deanović’s and Jernej’s dictionary (1982). Using the theoretical framework of lexical phonology (Kiparsky, 1982, Mohanan, 1982) we were able to reveal some important fact about the structure of SC. Our first consern was to establish the distribution of iota in monomorphemic words, prefixes and suffixes. The examination of roots ending with iota revealed an important difference of SC variants: j appears after i at the end of words in the Western variant in 74 examples of the type laboratorij, kalij, which in the Eastern variant usually end in jum. We have also established that no morpheme in SC begins with ji — a fact which according to Pulgram (1970) should have important consequences for the structure of SC syllables. Roots with final j do not combine freely with, suffixes containing i or j; for suffixes beginning with consonants there are fewer restrictions. J from the affix may follow at the surface r, s, z, ž, č and. exceptionally d (in punomoćje), and j from the root the consonants s, z, b, d, к from the prefix. Final consonants from prefixes do not ptlatalize before j, and this observation may complicate the determination of lexical levels in SC in the sense of lexical phonology. Our analysis also discovered the existence of infixes aj, oj, ij which so far have not been noted in SC grammars. The alternation t — с/....ij is a lexical rule which, in spite of some exceptions, is common for both variants of standard SC. Our statistics have brought out some important facts about the distribution of groups ji and ij in SC. We have found out that the group ji does not appear in monomorphemic words, except in a couple of foreign (borrowings (p. 13). In complex words, j before i is lost, or, in very careful speech, becomes ambisyllabic. These regularities are the basis of the orthographic rule 48c (Pravopis, 1960) about the writing of iota before i. The group ij in SC appears only at morpheme boundaries; in final position and before consonants there is a tendency to delete j (j — Ø) in colloquial SC. Our analysis also shows that the j-deletion in context i....0 is a lexical rule which is applied only in word formation, but disregarded at the level of inflection. The j-insertion in context i....V, (V ^ o), is a postlexical rule which is applied at all lexical levels, but also at the level syntax. At lexical this rule became redundant because of the lexicalization of iota, which is proliferate in SC because of the morphological rule that nouns and adjectives must halve stems ending in consonants. Because of this iota may lexicalize in positions where it can appear as a part of the stem, but never after prefixes (for example *prijanjati), although such writing would be in accordance with pronunciation. On the other hand, the j-insertion in context e....a is a lexical rule which applies only at inflectional level; in this context iota is also lexicalized and appears in the nom. sg. of masculine nouns (example relej). Our observation that the structure of syllables is not isomorphic at different lexical levels has a special significance for the general linguistic theory. This fact has, however, been overlooked in recent literature (see, for example, Clements and Keyser, 1983), although the cuclic application of rules accepted in generative phonology requires «syllabification at different levels in the course of derivations.